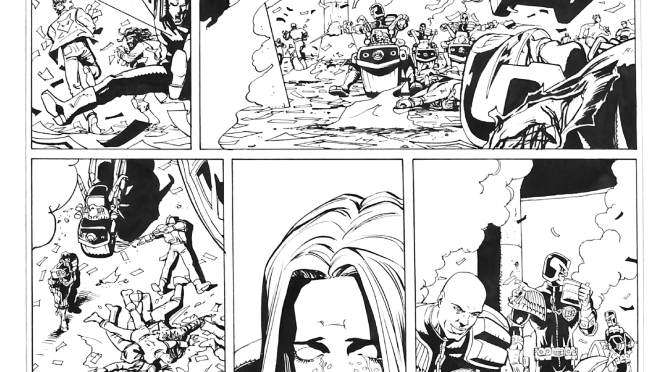 This is an archive interview provided by Eddie

Lee Sullivan is one of the leading comic book artists of his generation. With contributions in Tranformers, Judge Dredd and of course Doctor Who, he has helped shape British Comics in the last thirty years and given a unique look to some iconic Doctor Who strips.

I was lucky enough to speak to this personable and friendly artist, so hit him on the head and strapped him to the Mind Probe…

The Doctor faces off with Judge Dredd

When did you realise that your artistic ability was better than your peers?

Probably at around the same time I realized that my peers were all better at football than me – junior school I suppose. I’ve always been fascinated by the fact that most children can draw to the same degree when they’re very young, and then something happens – it’s almost as if there’s a limiter or something in most kids’ heads – they just stop wanting to. I think if you just carry on drawing, you get better. The degree to which you get better is determined by the amount of talent you have, but also by how much you draw, which is in turn governed by how obsessive you are about drawing. As a child I just drew ALL the time.

There’s a difference between conventional “art” and “comic book art”, did it take you a while to find your niche?

Yes, although really it was a case of being diverted by pragmatism. I drew comic strips for my own pleasure as a kid and only really thought in terms of storytelling, but I knew ‘commercial art’ was out there; I could see how to get to that (training at college in illustration) to make a living and I couldn’t figure out a way to get into comics. So I sort of forgot about comics until I got my first issue of DW Weekly and thought ‘oho – that’s the job for me!’ By then I was working as an illustrator/designer in British Aerospace. I drew some sample pages, met David Lloyd at a Who convention and realized that the page rates were nothing like freelance rates in advertising and my speed was very poor; so I forgot about it again.

Then I went into freelance advertising illustration, worked on things that I had no interest in, met John Higgins who pointed me towards magazine and, as it turned out, more importantly comics cover illustration. So I was suddenly working for Marvel UK, producing covers for Transformers & Thundercats.

When did you think “right, I’m going to do this for a living?”

I never made that choice; comics just phased in and the other stuff phased out, as the comics stuff increased in frequency.

Was it an easy thing to realise?

I suppose what happened was that there must have come a time when I started to turn down crappy ad jobs, and knew what I was doing. But freelancing is an unpredictable business, and I don’t remember consciously deciding anything.

How does it feel when you get your first professional commission – would that be Transformers?

By then, I was used to people commissioning me to produce all types of things, but I was pretty excited to get my first strip-work. I asked Simon Furman, who was editing and writing Transformers UK Mag, for a script to work on and he showed me one that had already been drawn. I took it away and realized I hadn’t the faintest idea how to approach it, and it wasn’t a commission so there was no real impetus to get it done. So I waited and watched my contemporaries for about a year, then asked for a proper commission – the proviso being that if I turned in something awful, they didn’t need to accept it. That’s a reasonable no-risk scenario for an editor, and Simon agreed, I drew my first TF strip (Altered Images) which was accepted.

With the range of series you’ve worked on, do you have to be a fan?

Not really, I hadn’t a clue about Transformers – and they were quite for a young age group, but as a professional illustrator, you tackle everything that comes along with as much enthusiasm as you can muster.

Do you have a favourite? Other than Dr Who of course…

I’ve really enjoyed most of the things I’ve worked on, but for many different reasons. TF because it was the first; Robo because it was working on a full-blown US comic for the first time; TekWorld because I got to meet my Star Trek hero William Shatner and design the future; Dredd and 2000AD because it made me feel like I fitted into the UK scene; Who because of my fan relationship with the series and it was the most long-standing strip from my childhood; ditto Thunderbirds.

How did working on Dr Who come about?

Richard Starkings was chief editor of boys comics at Marvel UK when I was producing TF strips and was looking at changing the way that DWM strips were produced – I think the idea was that each story would have a different writer and artist in the same way that tv stories have a different writer and director. He was handing out the stories to various Marvel UK artists and my memory is that I asked him for one in the pub one evening . He gave me one particular story but at the same time I had produced a TF strip which featured a likeness of Richard Branson; there was a Who strip which needed likenesses of the first 7 Doctors and some companions, so I got moved onto that. Planet of the Dead kicked of my DW career in a big way.

How close do you work with the writers? Or do you interpret their scripts?

For the most part there isn’t really time to chew the scripts over with the writers – you just get on with it, if the script is good – you shouldn’t need to; it’s all there on the page. Really, at that stage you’re working through an editor anyway.

My style has changed quite a bit over the years, sometimes depending on the story, sometimes on what other things I’m working on and the style that I was using then. I don’t think the Doctors make a difference. I would have been rather stumped with my first story which featured the first seven!

Why do you think you’re associated with Dalek stories?

Because I drew a fair few of them! I am a Dalek nut I suppose, and Richard Starkings was keen to get them into the strip again and wanted someone who would draw them sympathetically, I suppose. I always took the view that, although people kike Ron Turner and Jennings gave them their own (wonderful) spin – they hadn’t really looked quite like the TV versions, so, being a pedantic kind of a guy, I drew them looking as they do, and adapted the hoverbouts to fit around them, things like that. The fans seemed to respond in kind, so that’s what gave me my reputation back then.

Do you have a favourite Doctor to illustrate?

Oddly, Davison (fifth), who I found quite easy to capture, and whom I only drew once in strip form. I did a lot of Big Finish previews later in DWM which made up for that. Sylv and Hartnell were the hardest. Sylvester’s face was always moving, shifting, and to get a likeness to seem consistent from panel to panel meant you couldn’t just rely on photo reference.

As a fan of the series, how much do you reference it in pictures and atmosphere other than likenesses?

I think you have to approach each story differently to try to match the tone of the script. If it’s a dark theme then you can ladle on the grime and grit; if it’s lighthearted, then you lay off the grim stuff. But I think I react instinctively for the most part!

Do you have a favourite tv era?

More and more I lean towards the Hartnell era – the mystery and magic were still there and even at this distance it’s still the best format for me. Like early Coronation Street (versus the current version) it’s striving for serious drama, and working out what you could do on television, as opposed to film or drama. It’s so fascinating because each Doctor’s time is now a period piece in its own right. But I love the first five, and after that, well, I was growing up and starting to challenge the direction it was going in.

What do you think of the new series?

I like Series 5. Moffat’s take on the series is much closer to my taste than the previous series, but I’m grateful to have worked on the Tennant strip for Fabbri’s ‘Doctor Who – Battles in Time’ and to have drawn the new Cybermen and Daleks in that.

Has your style changed with the new series and its new look?

For ‘Battles’ it was necessary to make the art much more simplified and accessible to kids of a much younger age-group. Conversely, the TARDIS interior and the New Series Daleks were much more complex.

For the uninitiated comic-virgins, how does the process work with a comic strip, between inker, penciller, illustrator etc?

Usually, most strips are produced with a pencils artist working from a script to produce thumbnails, roughs and final pencil drawings; these are approved by the editor, then the pencils are passed on to the inker, who inks over them whilst the penciller begins the next set of drawings. The same happens with a separate colourist. In my case I usually like to work with very loose pencils and do more of the work at the inks stage, as I seem to be able to get better results than when I draw pencils alone. And yes, it’s hand-drawn on paper with pencils and ink pens, then taken into a digital format for corrections and colouring, which is almost always coloured in Photoshop these days.

Does your style or approach change between franchises and mediums – for instance, with Judge Dredd being more “adult” or something like the DVD files being more aimed at kids, do you adapt how you do these?

Yes – it depends on the age ranges and style of the publication. With adult audiences you can pretty much be as grim and gritty as you like, but for younger audiences you have to be more careful, and often have a more simple style. The DVD Files stuff is an interesting collaboration – I provide roughs and basic outline art for colour artist Tom Connell to paint up in Photoshop.

Do you have a favourite writer you like to collaborate with?

Ah, writers. Splendid chaps, all of them.

What do you think of the new series compared with the classic?

It’s improved vastly in Series 5; but I wish it didn’t have to rush all the time. So much to squeeze into one or two episodes – there’s no time to let things develop. The last Dalek story as a case in point; suddenly trainee pilots are able to fly around in space with 2 minutes notice. The new Daleks are, I’m afraid, awful. Horrible from every angle – proportions, height, angles all clumsy and mismatched. Like cheap, badly observed amusement ride versions. And who knew the paradigm was Dapol?